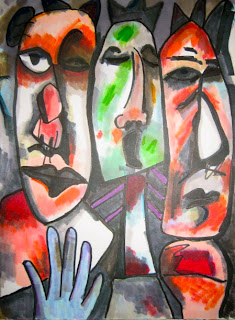 To live in the city is to live in the presence of strangers. For those of us living in cities, passing strangers on busy streets is unremarkable. We are rushing to our next appointment, preoccupied with our own thoughts, navigating through the crowded sidewalks. On “auto pilot”, we don't even think about our brief encounters with unknown others in public spaces.

There is a norm of anonymity which governs behavior in public between strangers. Normally strangers quickly glance at each other and then look away. Through this ritual, which sociologist Erving Goffman calls “civil inattention”, we demonstrate that we recognize the other person's presence, are not seeking a sustained interaction, and have no hostile intention.

As stated, the norm is that strangers do not talk to one another. Typically at about eight to ten feet from one another we have a very brief exchange of eye contact, and then avert our eyes. In making eye contact, we acknowledge that we see the other person, and that we will not invade their territory. In averting our gaze, we display our lack of recognition of the other and our unwillingness to become more familiar. This type of facework creates a climate of minimal security, thus helping to keep down feeling of anxiety or fear. The ritual of civil inattention seems to suggest “you can trust me...I am not going to attack you”. 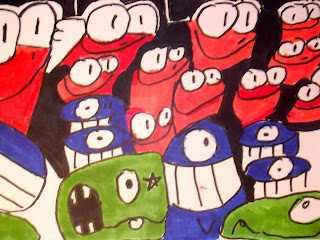 Of course, this norm is violated millions of times each day. Lost in a distant city, we approach a friendly face on the sidewalk and ask for directions. Stunned by the elderly man who just backed his car into a street light, we make a comment to a fellow witness at the gas stations at which we are pumping gas. Overcome by emotions at a friend's funeral, someone we have not meet, but clearly also known to the deceased, briefly consoles us. Wearing your favorite Hawaiian shirt at a street fair a person wearing the exact same shirt, smiles and say “Hey nice shirt!”

There are places at which which encounters between strangers are more permitted, typically locations which give off pertinent information about the person— such as local gyms and airport waiting areas. Moreover, certain people are seen as more “open” than others, including women, (especially very attractive women, pregnant women, or those with small children), people wearing uniforms and those who work with the public.

Let us consider how we “do modernity” through this simple interactional ritual. Is this everyday micro-ceremony emblematic of our modern urban way of life? Are these anonymous encounters with countless others in public places somehow unique to modern cosmopolitan societies? Perhaps like Georg Simmel's “blasé attitude” they reveal our “detachment” from the world, display the “impersonal” nature of our societies and are indicative of the over-stimulation of crowds. Ideas all worth exploring...

Obviously, we can only speculate about what public encounters were like among strangers in pre-modern societies. Swedish economist Axel Leijonhuvud's 1995 article “The Individual, the Market and the Division of Labor in Society” describes the life of Bodo, who lived in the Parish of St. Germain de Pres in medieval Europe. Today we would say that that parish is in the heart of Paris. But in Bodo's time in was a rural parish distant enough from Paris that many of its people had never seen Paris. 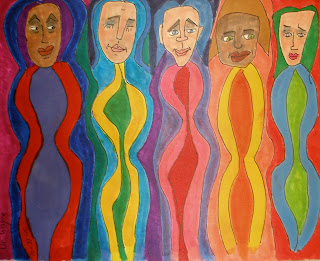 Virtually everything Bodo consumed was produced by about 80 people that he probably knew better than we know any but a few people. The 80 people in Bodo's social world would be all that most adults would know or deal with for their life times. Most of them would have NO sustained interactions with others. Russell Hardin in his book, Trust (2006) discusses the role of trust in Bodo's village:

“If a stranger came from the outside into Bodo's village, the villagers would been very wary and careful in their deals with that person... they watch out.” (p. 10)

This sounds like a mode of interaction very different from Goffman's civil inattention and how we “do modernity”. Rather than the averted gaze and trust-inducing nonchalance of our modern civl society, Hardin hints at a harsher form of facework in which eye contact is prolongued and attention heightened. This “uncivil attention” might have been a dominant mode of interaction between strangers in public places in pre-modern societies.

A norm of mass market societies which requires one carefully avoid interaction with other's physically present. If the others are part of a social base, then civility would be required; if others are nonpersons, then one can be uncivilly inattentive, i.e., one can stare, push, look through, speak through or talk about others in that presence. Black persons are often subject of uncivil inattention in the North and the South, as are dwarfs, cripples, celebrities and strangers. This norm when observed, produces a mass society.

Some interesting observations are included above that would place the conception of civil inattention more fully in a CRITICAL interactionism. The idea that these brief encounters with strangers help to produce a “mass society” is interesting and very worth exploring I believe.

The mention of “uncivil inattention” is also interesting. Goffman (1966: 83) takes the use of staring at someone as a way to sanction them (“the hate stare”).

The “nonperson treatment” (Goffman 1966: 84) in which we act as through we do not see someone, as if they were not there, seems to me to be a feature of modern societies. Oppressed groups of all types report this form of public treatment. Both of these demonstrate how much can be communicated through our eyes and bodily comportment. 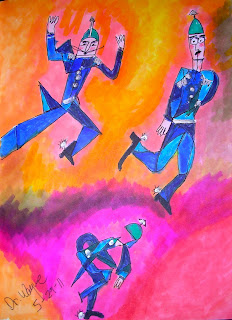