TO THE INITIATE
(a prose poem) 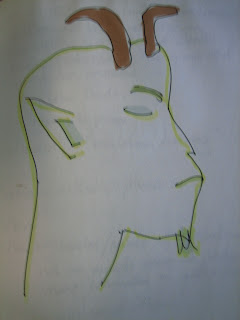 Dionysus cries out in the streets.  In the squares he raises his voice.  At the entrance of the city gate he speaks: “How long, O foolish ones, will you love being foolish?  How long will sufferers continue in their suffering and refuse to hear my words of wisdom?  Listen to what I have to say as I make my thoughts known to you.”
A set of secrets will be revealed to you – secrets which have been known to the wise ones throughout history.  They are rivaled by those of any secret society – Knights Templar, Rosicrucians, or Freemasons.  As Plato states in Phaedo (69c): “For many are the thyrsus-bearers but few are the bacchoi”. 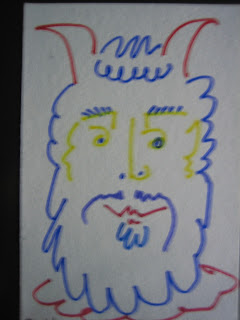 Fascism now pervades our everyday lives, shaped by a consumerist materialism which destructively represses our desires.  We all need to escape alienation and transgress the boundaries of conventional society.  We all need to explore our desires and decode its flows.
A sacred general economy has guided the movement of humanity through its need to survive.  On the one side we have order, law and creation – represented by the Greek god Apollo.  On the other side we have chaos, transgression and destruction – represented by the Greek god Dionysus.
Not one or the other, but both sides now.
Friedrich Nietzsche rediscovered what he considered to be the “truth” of humanity within the ancient Dionysian cults.  An unconscious lifeforce propels us to ecstatic desire.  We are creatures of crave “jouissance”.  Another truth that Nietzsche discovered is that there is no truth.  All moral judgments are relative to geography. 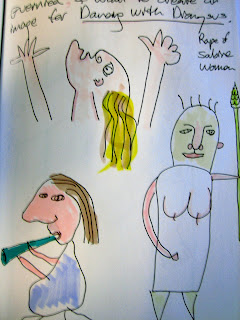 On the one side we have Apollo who represents beauty, permanence and perfection.  On the other side we have Dionysus, who represents tragedy, intoxication and reverie.
Not one or the other – but both sides now.
Modern humans have become debased by absolute adherence to order and stability.  Through this Apollonian triumph we have lost our essential meaning and have become “things”.   How we yearn to return to the immediacy of life at the edge of chaos.  How we yearn to dance again with Dionysus. 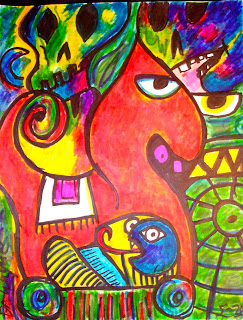 Nietzsche called for a return to the repressed side of the Dionysian, though he knew it was a Promethean task.  “Are we up to it?”, he asked. 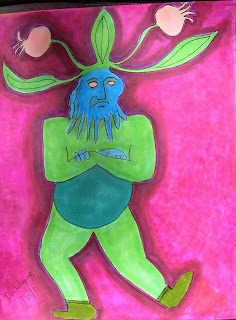 That which brings the greatest joy also brings the greatest pain.  That which makes us suffer most also keeps us going.  This is the paradox of our drive for jouissance.  Nietzsche knew the impossibility of life without jouissance.  You cannot close off all awareness of jouissance is a world based on the rational ego, capitalist production and bureaucratic efficiency.  This is impossible.  Jouissance will break out anyway.
While I urge you to tear off your chains and examine your desires, a strong caveat is in order.  Look what happened to me!  In unleashing my repressed desires and pursuing pleasure to excess I had hoped to become a liberated nomad exploring a thousand plateaus.  I have learned that if you venture too far “bodies with organs” can become “bodies with brains”.  Exploring is a good thing.  Falling off cliffs is a bad thing.
Yet, although I have lost everything and am on this day imprisoned by our drug war machine, I do not regret my pursuit of pleasure to dangerous excess.  How many people in our culture can claim to have lived their fantasies, to have gotten in touch with their deepest desires and to have decoded its flows.  I do not regret dancing with Dionysus 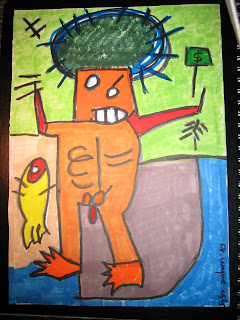 I have become a wounded healer, possessing knowledge of the dark, the shadow of chaos and evil which haunts all aspects of life.  I have learned to maintain balance by drawing upon my experience of intimacy with the universe.