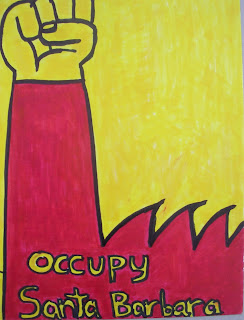 Wayne Mellinger: Occupy Movement’s Focus on One Percent Is Right On

http://www.noozhawk.com/noozhawk/article/032212_wayne_mellinger_occupy_movement_one_percent/
By Wayne Mellinger
Our system is in need of reform, to narrow the income gap and give all Americans a chance to make a decent life

Using the slogan “We Are the 99%,” the Occupy movement has drawn attention to the massive concentration of wealth among the top 1 percent of income earners. Awakening the angry resentment of class politics, Occupiers contend that “we” continue to pay the price of the mistakes made by a tiny minority of greedy fat cats — those bailed-out Wall Street bankers and corporate CEOs who seem to hold an unshakeable grip on American “democracy.”
The Occupy movement is politically savvy in drawing attention to the huge gap between those at the top and the rest of society. Consider this fact: The wealthiest 400 Americans have more money than the bottom 50 percent of all Americans combined. Meanwhile, a staggering one in three Americans, or about 100 million people, live in near poverty.
One problem with the Occupy movement’s political rhetoric, though, is that things are not that simple. The socioeconomic world of the United States cannot be reduced into “us” and “them,” and to paint an image of society as merely composed of “haves” and “have-nots,” as Karl Marx famously did in The Communist Manifesto (co-authored with Friedrich Engels in 1848), is to ignore the complicated system of social stratification that has arisen in the ensuing 160 years.
Of course, there are marked differences in the quality of lives between those desperately clinging on to the bottom of the barrel and those who are upper middle class and earning six figures with elegant homes and 501(k) plans, and to lump them all together as part of the 99 percent can be to erase those differences.
So who are the 1 percent? First of all, one must earn at least $506,000 to be in the top 1 percent, according to the Wall Street Journal. But as any sociologist will tell you, wealth is composed of two elements — income and assets — and for the truly wealthy, it is their control of assets (stocks, bonds and securities) that gives them financial power.
But not all of the top 1 percent earn their money through banking. According to Mother Jones magazine, only 13.9 percent earn their money in the financial sector. Other dominant occupations include nonfinancial executives and managers (31 percent), medical professionals (about 15.7 percent) and lawyers (about 8.4 percent).
While those at the top do not all work on Wall Street, they do control a disproportionate share of the nation’s wealth, including half of all stocks and mutual funds and more than 60 percent of securities. According to Bill Domhoff, an expert on income inequality at UC Santa Cruz and the author of Who Rules America Now? (2010 Sixth Edition), the top 1 percent own 42 percent of our nation’s wealth.
Most dramatically, while incomes for most Americans have flat-lined in the past three decades, the average income including capital gains for those in the top 1 percent has tripled, according to Mother Jones.
Increasingly intergenerational mobility is shrinking, and more people will remain in the same social class into which they were born.
And now the news out this past week. According toEmmanuel Saez, an economist at UC Berkeley, the recovery has been very good for those at the tippy top. The top 1 percent captured a staggering 93 percent of all the real income growth in 2010!
What is disconcerting about these types of economic inequalities is that they reveal a community in which some citizens do not have a fair chance at a decent life. The idea of equality of opportunity is at the core of the American Dream. Yet today it is much harder to pull oneself up by the bootstraps. Heck, for many Americans those damn straps keep breaking off!
Another disturbing aspect of this gross income inequality is that it is the result of an unfair process. In a sense, the game is rigged. The players who are winning happen to be the same ones who set up the rules for the game.
To defend equality and to object to obscene inequalities is to support a democratic community in which all citizens have a fair chance to make a decent life. If someone invests in a factory and makes a lot of money, there is nothing wrong with that person getting to keep a big chunk of it.
But the social contract that holds our country together means that revenues generated now are not simply extracted now. The wealthy have an obligation to pay forward for future generations. We need to invest in our future. The problem is that too many fat cats are taking out their chunks now and are not thinking about the kids who are coming along.
The Occupy movement has rightly put the spotlight on what sociologist C. Wright Mills called the “power elite” — the super-rich owners and top executives of corporations, banks and investment firms. Perhaps as more people learn that the enormous economic resources of the top 1 percent allow them to thoroughly dominate the federal government, we can gather the political inertia and transformative consciousness needed to change the system and make it more fair so that ordinary people will have a chance to lead a decent life.
— Wayne Mellinger, Ph.D., is a sociologist teaching at Antioch University Santa Barbara. His blog,“Doing Modernity,” examines how domination and hierarchy are achieved in everyday life.
http://www.noozhawk.com/noozhawk/article/032212_wayne_mellinger_occupy_movement_one_percent/