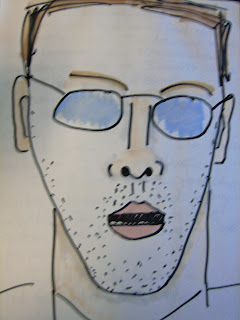 “If we still tell our lives as a narratives, we may nonetheless be coming today to experience them more as hypertexts”  (Jay Lemke)

In “Newz from the ‘Hood” (1997),  a paper based on my study of ‘gang murder stories’ in the Los Angeles Times as told as a "postmodern" modern collage in multiple disjointed voices (this was the 1990s!), I compared media consumers to “channel surfers”—the often bored, detached, and distracted viewers reluctant to become cognitively engaged in any sustained narrative and often defiantly emotionally disconnected.

“The ecstatic pleasures of the hand-held remote control derive from its power to momentarily relieve us from the tedious boredom and plain dull pain of the previous television show. Entertainment in the postmodern age is the endless shifting of commodity spectacles before eyes.  The flashing screen and collage and electronic signals create a mental space and consciousness totally colonized my media logic (Mellinger 1997: 18).

The montage method used in that paper derived from Walter Benjamin’s never-to-be-completed masterpiece, Passagenwerk—a study of the far-flung ruins and debris of the nineteenth century as articulated in the Paris arcades.

The fragmentary nature of postmodernity was to be recreated in my paper on gang murder stories through an uncanny juxtaposition of “samplings” of media spectacles, hodgepodge accumulations of scholarly references to crime news, and critically informed insights into the character of popular media culture.  The pagescapes of the Los Angeles Times were treated as a phantasmagoria of capitalist culture stocked with the dream residues of an epoch long in slumber.

I want to return to this "channel-surfing" metaphor and to continue examining what it might offer us as a way to understand the nature of everyday life in “late modernity”.  Perhaps the blasé attitude of channel surfers  (“been there, done that”) leads them on an endless search for authenticity through media consumption of televisual spectacles from around the world—rock concerts, royal weddings, scandals, sports heroes, plane crashes, terrorism, sit-coms and travelogues—all issued in an economy of visual images.

Or perhaps they are more motivated by the desire to escape the presence of advertising and commercialization, and therefore jump from one channel to another that might be quite disparate in content.

Or perhaps they have become “shallows” incapable of prolongued engagements.  Hours of multitasking and surfing might have re-wired their brains so that they are neurologically unable to immerse themselves in a subject.

In theorizing everyday life we must pay attention to how the routinized aspects of daily existence have changed, and examine how these changes impact the social organization of society.   I contend that it is through the mundane moments of everyday life that the nature of our modern world is ultimately achieved.  As I have written, we “do modernity” through these situated social practices as found in the rounds and routines that comprise our lived biographies. Let me re-state that in another way: the structural features of our social world are accomplished and reproduced in the concrete circumstances of our life.

Within the last twenty years, electronic devices of all kinds and new media of all kinds have colonized our lives and our brains.  And the “orientation” that infused channel-surfing with its character now seems to pervade more types of activities.

My concern here is with this broader set of practices which media consumers  employ to cross genre boundaries, content themes, and types of information.  Jay Lemke has dubbed these “transversals”[1].

Throughout our days, often with 24-hour connectivity, we are plugged in to our iPads, smart phones, laptops, tablets and often dip into them multiple times to check messages, look up information, post something on Facebook, etc.  Moreover, we often engage is prolonged activities in which we navigate through multiple pagescapes / screenscapes.  Examples of these practices include web-surfing, channel-surfing and reading hypertext.

Through these practices, one jumps from one page / screen to another, often juxtaposing disparate elements in unfamiliar ways.  A schizophrenic consciousness can emerge through the incessant juxtaposition of sequences of disconnected, unpredictable, idiosyncratic visual stimuli, textual strategies and audio clips.  There is an aesthetic and design element which pervades these experiences.  Like postmodern architecture, the aesthetic is a combination of elements from diverse sources in unfamiliar ways.

Importantly, those who engage in these discursive practices are actively creating their experience, and this “agency” must be emphasized. Moreover, while the meaning derived from such practices is different from that derives from the reading of traditional, standardized, genre-specific texts—meaning is to be found through these practices.

While it is beyond the reaches of this short paper to fully describe the phenomenology of these “traversals", let me hint at some of their features:

I invite the reader to see parallels between our engagement with “traversals”, such as hypertext, and how we live our lives in “late modernity”.  I believe that the discursive orientations that we use for these forms of media consumption have come to dominate the social character of contemporary life.  The “social type” of the web surfer is one of the central personality styles of our era.

Here are some of the features of the web surfer as a social type that may represent the new personality type of late modernity:

If we "DO" modernity through our situated actions, as I have attempted to argue through this blog and it's postings, how are we now accomplishing the nature of "late modernity" in ways different from the ways in which previous generations achieved their social worlds?  Are we able to pinpoint the specific features of the social practices that have changed over the last 20 years, including those practices that make up transversals?

“Discursive Technologies and the Social Organization of Meaning” Folia Linguistica

“Newz from the ‘Hood: The Stephanie Kuhen Murder in the Los Angeles Times”. Human Systems

[1]
“Transversals” (Lemke) are “temporal-experiential linkings, sequences and catenations of meaningful elements that deliberately or accidently, but radically cross genre boundaries” (Lemke ).  Lemke argues that channel-surfing is one forms of transversal, along with web-suring, hypertext and mall-cruising.  All of these examples involve the consumer as an active creator of a trajectory in which in which genre boundaries are crossed leading to a juxtaposition of quite disparate contents and domains of human activity.